The Philadelphia experience – The 2017 NFL Draft

My first NFL draft was something to experience.

Philadelphia is often a host city for a number of large events, starting with New Years and the Mummers, to every Race, Charity and public commercial event, even in 2016 Papal Visit and the Democratic National Committee.

The NFL moved from Chicago to Philadelphia this year, from what both numbers, and attendees say, it was a success.

Over the Weekend the estimate was 250,000 people. (Understand people who participated for the 3 days were at minimum counted 3 times) 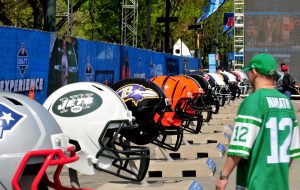 The benefits of Philadelphia as a host city, besides a plethora of hotels, numerous things do outside the NFL event and a historic city to explore, is the logistics of being in the Eastern Corridor for transportation. With Amtrak, Boston to Washington DC is a train ride away. With the Highways it is a central transportation hub. Baltimore/D.C. is about one hour and fifteen minutes away, New York is about an hour and a half, New Jersey is a hop away. With a robust public transportation, once in Philly you can get where you need to go.

New York has an issue of being too big for comfort. Getting in it is a task, as is getting out. The cost of Hotels and the lack of the ability to go anywhere in a car hampers it being a usable venue. Baltimore is the same. Baltimore though having a number of highways going into it, has the issue of horrible traffic congestion, a sever lack of any real public transportation, and in most areas that would host the event, a pathetic lack of parking and an overabundance of Parking meters, no parking zones. With Tolls and traffic, Baltimore being near the end of transportation hub makes it less than a good choice.

Philadelphia is central and a quick jump to Baltimore, New York, Atlantic City, and the Pocono Mountains and if you are curious, Lancaster and the Amish. That makes it a place where it’s good for a pre-NFL experience or Post because you have so many options.

There was talk after Philly based the entrance best numbers, That the NFL is expected to return in 2017. This all depends on how Roger Goodell decides on the issues of his resounding Booing. Day three (the last day) Mr Goodell was missing from the platform and Nary a boo was heard, except for the rivalry boos and they were mild overall.

How was the NFL Draft?

The Philadelphia Draft Experience was not as bad as the Papal Visit. Security was brisk but not overly oppressive for a large scale event.

Entering the event before getting to the Security, visitors walked through a row of large football helmets. This allowed people to line up and take photos besides a team of choice. Being hosted in Philly, the Eagles helmet almost always had a line of people, Understand this line was self created by the visitors and during the entire event did not have an issue. People loved them and some climbed under them to sit down with their heads in the helmets (frowned upon) the only thing security got quickly involved in was people climbing on things. (people trying to climb on top of the helmets got chased off for safety reasons) Maybe the NFL will make large helmets to stand in and have photos taken in the future, because it seemed people wanted this too.

Security lines flowed fast and even at opening, from the back of the line took no more than 10 minutes to get through. Once inside from the main entrance, you ran directly into the NFL shop. (and could take a left or right detour around it)

The first giveaway, besides a water refill station, (refrigerated thank goodness) was the Oikos Truck. They were giving out both the Oikos Triple Zero Yougurt (Banana was surprisingly good) as well as the yogurt drink.

On the other side of the NFL shop, you now had a chance to go into NFL history tent. Besides signed helmets and other historic displays, you also had the opportunity to get up close and personal with all the Superbowl Rings. Behind glass in a display you were able to look at and take pictured from about a foot away. Most of us hear about the Rings, maybe see a player on TV that has one of those on his finger, but this allows you to see what they really look like up close and personal.

Besides the sponsor booths and food vendors, the experience included a kids challenge, a zip line and quite a few other interactive experiences. One of the other popular Photo Stops was the player uniform standup figure that you could climb up on and take a picture of yourself decked out in your teams uniform.

The Draft location on the steps of the Philadelphia Art Museum, did leave a little to be desired. Though historic, the Fountain directly across from the stage does cause an obstruction. Secondary to this, the sound for the event was sub-standard at best. Unless you were in the event tent (ticketed), people in the crowd and in the VIP area directly across the street, could not hear anything happening on stage. (200 feet away)  Not a lot can be done about the fountain obstructions, but I hope if it returns, the issue of sound and speakers is resolved.

The Philadelphia NFL Experience, gets passing grades on the event. Other then the perpetual neighborhood invasion the local residents have to put up with, the event overall was a pleasant experience, visitors wearing non Eagles jerseys, may have got the occasional heckle, but were overwhelmingly welcomed.