Baltimore’s Light City,  as a concept is a fun idea, but it is hampered by the fact it is being held for profit in the Baltimore Inner harbor. Profit is not the issue, it’s the harbour area.

The concept of a festival where artists bring together artwork using light to present a captivating view for visitors and take them into an other-worldly experience is not a new concept.

Fireworks, Lantern Festivals, Phosphorescent caves all bring back the wonder and joy, stored in our brain from childhood looking at the stars, chasing fireflies and going to carnivals.

This is exactly the issue in Baltimore City.

Where I grew up, Street lights existed but they were far and few between, Stars could be seen overhead and you could identify constellations. Fireflies in spring started to appear and made floating ground level lights, something enjoyable before the later season gnat flies and mosquitoes.

Baltimore has many larger parks that would serve as a prime place to host the event, unfortunately it resides in Baltimore’s Inner Harbor. Though great for marketing and parking fees and eateries, it is far from optimal for the event.

This year the brightest display was a Ferris Wheel. Carnivals always remind us of memories, both Ferris Wheels and the carousel, but that should not be the show stopper.

The light show had a few “bright” moments. There was a free booth that you could construct a light item out of straws, small craft balls, tape, electric wires and small LED’s. They also had you do light painting with what you made and flashlights.

The main issue of the whole event is Baltimore Inner Harbor is a bastion of light pollution. The event having an undulating skeleton structure of a whale or fish backbone set to eerie music that would fit well in the movie Close Encounters of the Third Kind, sat isolated at the end of a pier.

One side had drones flying thru a lit obstacle course, interesting as the concept is, the lights were little more than small wire forms with little artistic value. The entire presentation was based on driving people to a drone event and also marketing getting a drone license and going to the school.

Of the remaining things, lights hanging on a string with a small oscillating motor to make them sway, 6 foot light triangular pillars packed tightly into an area too small for both the number and crowd.

The “bright part” was the field of LED flowers with changing colors. It was out in the green area off the main walkway, and the only issue is the field of flowers being roped off. On a display of tall LED flowers, Having a path through or indented area’s for photography and selfies would have promoted it better then it’s beautiful visual, but wholly separate experience.

Out of the two Baltimore City Parks, Patterson Park is the best venue. Though not a hotbed of Stores, it offers neighborhood parking, a short walk to Boston Street and the restaurants there, a little longer to Fells Point but not much. Without the Plethora of inner harbor surveillance cameras on constant watch, a larger police presence would be needed in the Patterson Park area for the event. Patterson Park is also on Eastern Avenue allowing for plentiful public transportation. The other park, though possible a better environment for a light festival, Carroll Park, would work except for the lack of both parking and public transportation.

Baltimore’s Light City is a good concept but it is like having a light event in the daytime, too many lights remove the atmosphere, too many people in an area that already is crowded. Evaluation – If you’re in the area, you  may as well look but it’s not worth parking or even a drive specifically for the show. 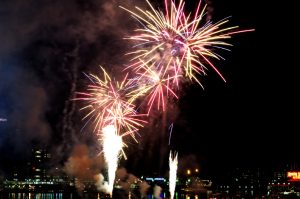 Small End of Show Fireworks – 45 minutes late and after the crowd left.