Baltimore City was on a madcap run to be number one Shooting per capita in the US. The Murder a day comment from just a little after 6 months into the year, in then end was pretty accurate. The Year end total was 342 homicides. 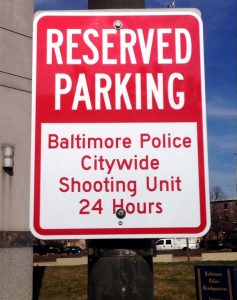 In November of 2017 as the number climbed, the mayors office became quiet to all the media buzz. All the news conferences and replies about the shootings, suddenly and without warning.. went silent.

I made an educated guess based on Catherine E. Pugh’s political history, We would not here from her again until after the new year. This almost went by except for the banning of signs deemed “inappropriate” at Mayor Catherine Pugh’s Candlelight Vigil. The Vigil was set for outdoors but due to inclement weather was held inside the War Memorial. Fitting for a city at war.

This brings us back to the silence. The Mayors office was running visual surveillance to… not only watch the crowd, but control the message. If someone did not have an approved signage, handed out by the mayors office, or contain the proper message, they were asked to leave by people in plainclothes. The Mayor and Police denied they were involved in the action until the police radio communication records were identified and made public from the event. Again silence after this was shown.

My guess was based on three things,

Unlike the normal world one lives in, where work and life goes on, and anything not done today.. rolls forward as more for us to do the following day, The State Legislature does not work like that. The Maryland Legislature works for the first 3 months of the year, a legislative session. Just into April, the session ends. Anything that was on the table, never got to the table, or died on a vote, is forgotten as if it never happened.

It can be revived in the next year but in effect, everything from the prior 3 months, moves to the trash bin as if it never existed. I expected the same mentality on the murder count and I was not disappointed.

Just into January 2018, Mayor Pugh was confronted by the statistics of how bad the homicide rate was, and the response was that was last year. What horrified me by this act, though completely expected, was she was in effect saying.. your child/husband/wife/mother/father was killed in December, well they don’t matter because it was last year.

To change the the tone of a do nothing police department, who because of fear after Freddy Gray and the Fed probe, stopped being aggressive in enforcement. The restraint was promoted by the prior mayor. For months prior Pugh promoted, supported and gave high praise until the very moment she replaced Kevin Davis with Darryl De Sousa as the city’s top cop, saying a change of leadership was necessary after last year ended with a record homicide rate.

This was truly the act of a CEO of a public relation firm. Pugh took action and made a change ignoring the praise prior and as a new year, new things would happen. What was the genius behind this action?

If Darryl De Sousa was successful at lowering the homicide rate, or as trends happen, it trended down in the following year, the move was validated and the action… was that of a good leader. But what happened if it did not make a change in the murder rate? Well then Darryl De Sousa was new and it takes time to make changes that will have an impact. A good or bad result would spin as a positive act.

A 2018 proceeds, we shall have to see what happens, but with corrupt police, lack of trust and a failed path to fix a broken system from the enforcement side (symptom) and not the cause. I am not saying all police are corrupt, but the actions of a few have tainted the lot and destroyed a lot of the credit some police officers deserve.

Part time summer jobs for teens do not solve the issue of a single parent household, they do nothing to get employment to people who were convicted of a felony and have served their punishment, but still can not get a job.

The path out of a destroyed community is rebuilding it. until the city is serious about building community and not just feeding large building contractors, not a lot is going to change.