Katsucon 2020 – A Convention pending the shutdown

Katsucon 2020 brought with it concern for attending. While the rest of the world was becoming aware that something was happening overseas, and there was some “outbreak” the U.S.A. home front was in a semi-blissful state of ignorance.

By February I was aware of the pending impact and scope and was forced to choose between safety and risk. This was not an easy choice as one would think. The US had almost no infections, but Anime conventions and people are aware of what is going on in the Japan region, and the convention has guests flying in fro overseas, so one has to factor in not only US infections but contact from Japan as well as people who flew in as part of the mix.

In the end I chose to attend Katsucon and be very aware of my surrounding and watched for people who may have been coughing or appeared sick. I love anime convention and particular the love. skill and detail people put into costumes for cosplay. I looked at the spread rate and knew it would not be long before this was a global pandemic, and I would not have conventions to attend for an extended period. I expected from the path of the influenza of 1918 pandemic, we would be looking at 12-15 months minimum and quite a large number of deaths.

Katsucon traditionally is the spring or cherry blossom of Anime-cosplay conventions, where people who have been sequestered for the winter months, appear like spring flowers and show off what they produced. It is always a roll of the dice as one day at katsu, it can be sunny and 70 degrees and the next 32 and snowing. this seasonal split is more common then not, of having both good and bad weather for the same weekend.

As usual Katsucon was wonderful, and procedures change every year or so. and during the 2019 and 2020 year, they started to enforce convention badges or hotel cards in the common areas of the Gaylord Hotel. This had a good impact as the prior years had been overrun by photographers who would enter the hotel common areas and fight for space with the attendees and photographers who paid. The effect is it reduced the massive prior clutter by about 35%. The secondary non intended effect was more personal space and less crowding, something I was concerned about anyway. 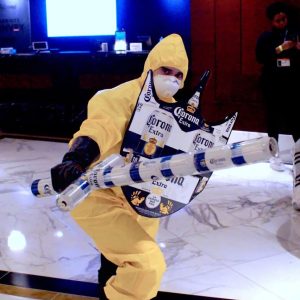 One of the Cosplayers, who I only managed to see in the lobby for about 4 minutes, late one evening, was in a Bio-suit and had a shield made of Corona Beer Packages and a sword made from Corona Beer cans. The Costume was humorous, and in a way dark, because as the cosplayer knew but no one was yet talking about, corona was on the way.

I am glad I attended and Katsucon is as always a place to be for the start of the year, but I fear that we are looking to hard times ahead and limited opportunities to gather for the foreseeable future.